Sunrise over Canoe Lake is a beautiful sight. The sun hangs low, just above the treeline on the eastern shore. The water is still as glass and the world is silent save for my muffled swearing as I drop my canoe on my foot. Fortunately, the only one around to hear me is a loon floating past the dock; I tell myself the loon isn’t judging me and finding me wanting, but  we both know that it is. Whatever Loon. Everyone knows you’re just a duck with a bad paint job.

The May 24th long weekend marked my first visit to my in-laws’ cottage on Canoe Lake in Algonquin Park this summer. It also marked my first opportunity to grab a canoe, drop it on my foot, and head deeper into the Park.

Last summer I made a few early morning trips up to Drummer Lake late in the season because I had gotten bored with my usual morning exercise; running the camp road (Arrowhon road at KM 14) and swatting at the clouds of mosquitos and black flies that swarmed me from Sim’s Pits onwards. It was a great full body workout, but I was spending my kids’ college fund on After Bite. So I decided to try something different and head up to Drummer one morning. As far as exercise goes, it was a good choice. The route is challenging enough that you feel like you’ve accomplished something by the time you reach the lean-to at the Drummer end of the Drummer-Gill portage. I decided to start this summer off with the same route to get my tripping legs under me. 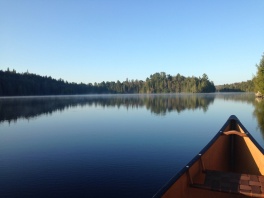 I left the dock on Canoe Lake at around 6:30 in the morning. At that time of day the water was smooth and the wind non-existent. That was a good thing, because after about ten strokes my arms were reminding me that I hadn’t been paddling in over six months and my shoulders were trying to convince my back to go on strike with them. Fortunately, it wasn’t far from my starting point to my first portage on the western side of Canoe Lake. 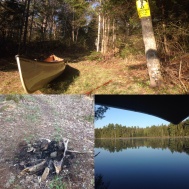 The portage up from Canoe Lake to Sam Lake is about 455 meters, mostly uphill. The maps mark it as poorly maintained, but it’s pretty clear right now. Well, except for the fire pit someone built about halfway through the portage because I guess sometimes you really need to stop in the middle of a 455 meter portage and fry up some lunch? Regardless, it’s a good portage to find your legs on. The path is wide and clear and the uphill isn’t too strenuous.

Sam and Gill are the two smaller lakes between Canoe and Drummer. There’s a 100 meter portage between Sam and Gill, but you can bypass that by paddling to the south and looping around. Because I’m on my own and travel light, I tend to take the portage as it’s faster for me. But if someone were travelling in a group with a few packs or a keg or the cast of Happy Days or something, it might make more sense to go around.  I don’t know. The Fonze is probably a beast on portages.

The portage to Drummer is just under two KM, a fair amount of which is also uphill (the good news is that going back it’s mostly downhill. Yay?). Last fall it was clear and easy enough to navigate. This spring it is, uh, not those things. There are a few trees down across the path. In one special place there’s a downed cedar next to a (usually dry) stream that’s running high with spring runoff. Nothing says summer like standing  in ankle deep water, your feet slowly turning to blocks of ice, trying to manhandle your canoe across a chest high cedar spear trap. I escaped that one with only light bleeding but, on the plus side, I smelled like a really nice sauna for the next five minutes.  I wasn’t the only one who found the crossing frustrating. A P-Store canoe was there when I crossed the portage and still there when I came back. Apparently someone before me finally gave up. That, or the canoe was making a break for it and only made it that far before collapsing.

Drummer is worth the aggravation though. It’s a beautiful lake that is also quiet, unusual given its proximity to Canoe Lake. There is a lean-to at the end of the portage that is a fantastic spot to have a snack and relax after the hike across. There were people camping there this time, still in their tents. I tried putting together a few Blair Witch style stick figures to hang outside the tents but they ended up looking like sad triangles so I gave up and left. 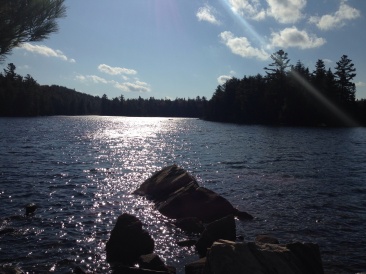 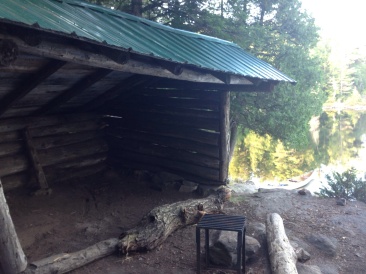 The lean-to at Drummer. Plans are in place to build a lean-three

Drummer connects directly to Little Drummer, home to a very nice camp site. The site is up on a rock wall and has decent tent sites and a great view of the lake. It apparently also has significant bug problems in May because the people camping there this weekend were decked out head to toe in this season’s latest in high fashion bug gear. I could hear the bugs laughing to themselves as they descended en masse on the campers. The last thing I saw as I paddled away was a middle aged man dressed like a bee keeper waving a paddle around his head and screaming “the deet does nothing” over and over.

I had originally planned on turning back at Little Drummer, but it was a nice morning and I’d never been up to Tonakela before. I decided to keep on going since it’s a relatively short portage from Little Drummer to Tonakela (540 m). The portage is generally in good shape until you get to the last 100 meters and the path ends in a mosquito infested swamp that God and time forgot. I know that super intelligent man-eating crocodiles are relatively rare in the Park, but I was 100% convinced that there were a minimum of 40 hiding beneath those stagnant waters, subsisting on a steady diet of mosquitos and unsuspecting portagers. I crossed anyway because there were so many mosquitos buzzing around that I figured the crocodiles were probably full. Tonakela is a nice enough lake, but it definitely seems like one you’d want to pass through on the way to somewhere else rather than spend the night.

I paddled down to the Thunder Lake portage then turned around since it was getting late and I didn’t want my wife sending out a search party. The trip back was quicker than the way up, all in all it was about three hours from leaving the dock to pulling back up to it. Definitely a good start to the season.

Six down, ninety-four to go.