The village of Magnetawan is a small settlement on the Magnetawan River, about 40 minutes north of Huntsville as the crow flies (if the crow were really drunk and hadn’t been introduced to the concept of a straight line). As far as small, Ontario towns go, it’s hands down my favourite. I’m biased, in that I spent a large chunk of my childhood/teen years wandering between the Downtown General Store (where they sold Downtown Magnetawan t-shirts and fireworks), June’s restaurant (where they sold ice cream and a surprising number of faith based romance novels) and the LCBO (where they were quite accomplished at not selling anything to anyone under the age of 19, which was a huge frustration for 15 year old me). The General Store and June’s burnt down a few years back, but Magnetawan is still there (as are the Downtown Magnetawan t-shirts).

Magnetawan, as you may have guessed, is named for the Magnetawan River, which is in turn named for its headwater, Magnetawan Lake, a small lake on the western boundary of Algonquin. Given my childhood connection to Magenetewan the village, I knew I wanted to see Magnetawan the lake at some point this summer. I convinced a friend to come with me on this trip by telling him that the drive would be short, the lakes would be beautiful and that there would be poutine at the end. At least I was right about the lakes.

The road into the Magnetawan access point leaves highway 11 about 20 minutes north of Huntsville as the crow drives, if the crow were driving at about 100 km/hour. I’m going to retire the crow jokes here I think, FYI. From there you pass through the towns of Emsdale and Kearney and then follow an increasingly dirtier dirt road to the access point for what feels like hours. The last few kilometres seem like a never ending series of curves so much so that it’s almost a surprise when you come round a bend in the road and find the parking lot as opposed to another bend in the road.

It was around midday on Saturday and the access point was swarming with trippers. I regularly use the Canoe Lake access point, which I believe is the busiest in the park, but I haven’t felt this crowded at the start of a trip all summer. Part of that is likely because the Magnetawan access point is small. The put-in is a medium sized dock with two small beaches, big enough for a canoe each, on either side. If you have more than two trips coming up and down the path from the parking lot it can feel like rush hour on the DVP.

The paddle across Magnetawan Lake to the first portage is short;  a chance to stretch your canoeing muscles and almost tip your boat. The portage between Magnetawan and Hambone is also short, and the flat terrain and makes for an easy carry. Hambone Lake is pretty, in a nondescript sort of way. So I won’t describe it. There are three campsites on Hambone, but to me I don’t think it would be much of a destination lake. It’s close enough to the access point that if you’re on your way out you might as well just finish off, and the next lake, Ralph Bice (Butt), seems to be one of the consensus favourite lakes in the park from everyone I’ve spoken to, so it’s worth the extra portage (which is also relatively short and flat).

The portage between Hambone and Ralph Bice (Butt) was the busiest portage I’d been on all summer to that point. There were at least four separate trips vying for canoe space and eating lunch at the Ralph Bice end of the portage and a couple others doing the same at the Hambone end. Although lunch sounded like a good idea, we decided to skip the great Hambone Ham Sandwich Festival of 2016 and try to separate ourselves from the pack. So, stomachs rumbling, we pushed off onto Ralph Bice Lake.

One of the things I find interesting about the Park is that from time to time the powers that be will rename one of the lakes, because I guess they want to confuse the hell out of any time traveling canoe trippers? Ralph Bice Lake is one such lake. It was originally Eagle Lake, and then became Butt Lake, before being renamed in honour of Ralph Bice, a famous figure in Algonquin’s history. Which must have thrilled the ghost of Ralph Bice no end because, according to Jeff’s Map, he hated it when the park renamed lakes. Legend (that I just made up) has it that if you listen carefully on quiet nights you can hear an old man shouting “it’s called Butt Lake!” on the evening wind. It’s magical.¹

Ralph Bice Lake is big, a fact that becomes extremely evident when you come out of the first bay into the teeth of a headwind pushing very large waves down the length of the lake towards you, like you’ve just paddled into Algonquin’s version of a wave pool. Fortunately we didn’t have to fight the headwind for too long, as our next portage was about 1/4 of the way along the lake. We pushed through the waves and arrived at the Daisy Lake portage, thrilled that we didn’t have to fight the headwind all the way down Ralph Bice, but less thrilled about the 1.4 km portage in front of us.

The Ralph Bice/Daisy portage is the only one along our route that day that I would classify as moderately difficult. (my portage classification scale: easy, moderate, difficult, fuck everything). The changes in elevation along the way make it feel longer than the 1.4 km marked on the sign, and there are a couple of spots where trees are down across the path, requiring some careful footwork. It took some time, but we made it across and rewarded ourselves with lunch and no broken ankles.

While we ate we debated whether to head over to the Daisy/Petawawa River portage to check out the falls marked on our map, or continue on our loop, which would take us the other direction (west) towards home. We decided to check out the falls and, like my recent decision to eat ice cream with every meal, it was a very good decision.

We paddled up to the portage expecting to find a set of falls in the classical sense; a towering curtain of white water thundering over a cliff, the Last of the Mohicans soundtrack playing in the background, maybe someone coming over the falls in a barrel. We didn’t find that, but what we did find was, in my opinion, better. The falls marked on the map are on the Petawawa side of the portage, and they’re nice enough, but there’s a spot about halfway along the portage where you can walk down to the river and find a series of pools and rapids that are tailor made for relaxing in. The pools are just deep enough that you can lie down in them and let the water flow over your shoulders. We spent a good hour lounging in the water, finding different spots to sit or lie down. There’s one spot where you can sit beneath a small waterfall (like, really small. More like a waterstumble) and get a fantastic shoulder massage from the water beating down. Definitely the highlight of the trip.

Eventually we realized that we couldn’t spend the rest of our lives at the stumbles. Well, we could, but those lives would probably end up dramatically shorter and soggier than either of us are hoping for. There’s only so much algae you can lick off river rocks before your body gives up. So we paddled back up Daisy to the Acme Lake portage.

Daisy is a lake I would like to go back and see again. The first campsite west of the Petawawa/Daisy portage looks like a fantastic place to set up for a night or two. It’s also a longer paddle from one end to the other than you would think. Or maybe not. Maybe you think the paddle is exactly as long as it is. I don’t know, I can’t read your mind. But it definitely took us longer to get to the Acme portage than we expected.

Acme Lake exists and the view from the put-in on the south portage is kinda perfect. And that’s about all I can say for Acme Lake. In the time it’s taken you to read this paragraph you could probably have paddled across it.

The portage out of Acme takes you back onto Hambone, and from there it’s back to Magnetawan and the access point. This ended up being a much shorter trip than I usually take, but well worth it as far as day trips go. It was really nice relaxing in the falls at the Petawawa portage and the route itself wasn’t too strenuous. All in all, it was a very pleasant way to spend an afternoon. So, I dunno, go there. 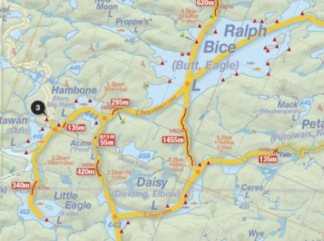 Stay Tuned, there’ll be a post coming on my three day trip down through Louisa in the next week or so.

¹. Ralph Bice actually called it Eagle Lake, but the joke works so much better with Butt. So … Sorry Ralph.

4 thoughts on “Magnetawan Lake and More”