This is a cool little site at the northern end of a string of sites along Booth’s east shore. It’s not the largest site, but it’s location at the tip of a very small outcrop makes it feel kinda secluded, even though it’s only a very short walk over to site 6.

Terrain: This is a pretty enclosed feeling site. There’s tree coverage along most of the shore, which adds to that secluded feeling but also makes things a bit dimmer (especially on a cloudy day). The terrain is flat enough, but not nearly as open as some of the other sites along this stretch of the shore. Ground cover is mostly dirt and pine needles, with the occasional rock thrown in for fun. 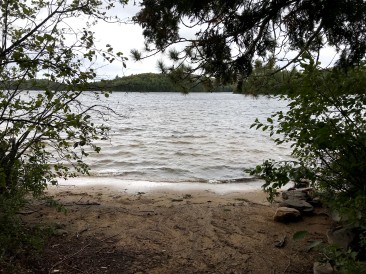 Looking towards the site from the beach

Canoe Landing: There’s a small beach at the south side of the site. It’s big enough for a couple of canoes and makes for easy loading/unloading. There isn’t much a rise to get from the landing to the site, but there are some rocks and roots to navigate. Nothing too difficult. The underwater approach is pretty good. Maybe a couple of rocks to scrape your canoe over depending on water levels, but nothing to get excited about.

Fire Pit: It’s a pretty darn nice fire pit. It’s in the middle of the site and, despite what I wrote a couple of sections ago about tree coverage, gives a nice view of the lake (or, one section of it, at least). The lake side wall is built high for extra protection against the wind and there’s a decent amount of room in the pit itself for your fire. All in all, I’d be happy to put a fire here. Maybe two!

Swimability: The beach seemed like the most swimmable part of this site, although I’m sure you could slip in along some rocks on the north side of the site if you really wanted to. The beach is separated from a much larger, better beach by a clump of bushes. If you wanted to wade around those you’d have a great spot to play, while still being removed from anyone staying on Site 6.

Another view of the site, looking north 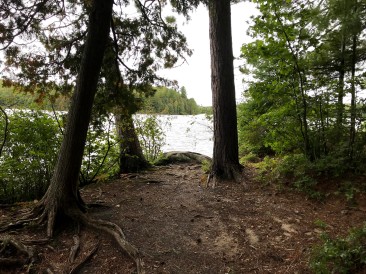 You could put a tent here!

Tent Sites: Room for a couple of tents, but this site doesn’t offer the capacity that some of the others along the shore do. That’s not necessarily a bad thing. The tent spots that do exist seem pretty decent.

Accessories: This site is chock full of them. The benches around the fire pit are well made and as comfortable looking as log benches can be. There’s a pretty extensive counter and kitchen area that someone with quite a lot of time on their hands has put together. There’s also a small, camp-craft-y bench that you’re welcome to sit on but that I wouldn’t trust, and what appears to be a guillotine framework, but probably isn’t as I feel like a guillotine would be a weird thing to have on a campsite. 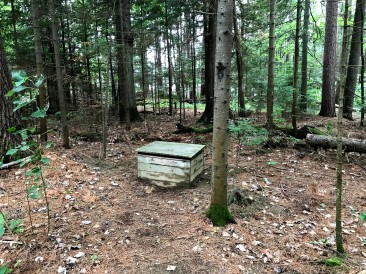 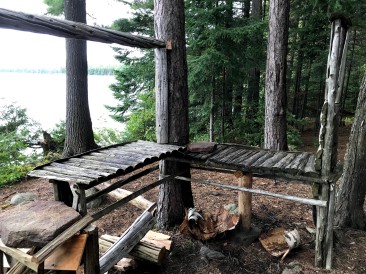 A close up of the counter

Thunderbox: It’s there and it’s not disgusting, so two for two on the “Things I Ask Of My Thunderbox” checklist. 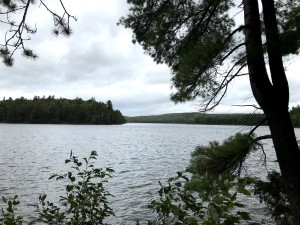 Views: Not the best. You’ve got obstructed views to the south and while there’s a nice window looking north, I wouldn’t choose this site for the view.

Notes: Like I said off the top. This is a fine site. Wouldn’t be my first choice on Booth, but wouldn’t be my last one either.