Terrain: This is a long, flat site. I have to imagine that part of the site at least used to be a road or a rail bed, because it’s certainly as flat as one. There’s a slight hill up from the beach landing to the site itself, but that’s about all uneven ground walking you’ll be doing. There’s decent tree cover in between the water and the site itself, which can help protect against the wind but also can make things seem a bit dim.

Looking north along the site.

I think you can probably land a canoe here.

Canoe Landing: There’s a nice beach fronting the site. Very easy to pull your canoe up here. There wasn’t much in the way of underwater obstacles that I ran across, apart from a couple of decidedly not underwater rocks sticking up here or there. The only challenge I had in landing was from the wind. The site is on the eastern shore and looks all the way down Booth as it doglegs to the west. This means that if there’s a strong west wind it’s got the entire expanse of booth to pick up steam and throw waves at you. I didn’t so much land my canoe as get blown onto the beach.

Tent Sites: Like I said off the top, plenty of room for tents. At a conservative estimate you could probably put half a million tents on this site and still have room left over for a hammock. Seriously, this would be a good spot for a big group, or maybe just a big tent.

Looking down the site, lots of room for tents

Fire Pit: It’s a huge fire pit. Someone has taken the time to build up a very high wall on the water side, probably because of that wind I just mentioned. I would definitely build a fire in this fire pit.

Swimability: Seems like a pretty swimmable site, even though I didn’t swim here. The beach makes for a great water entry and you would get some great afternoon sun (provided the sun is shining. If it’s not, you’re getting some afternoon clouds I guess). 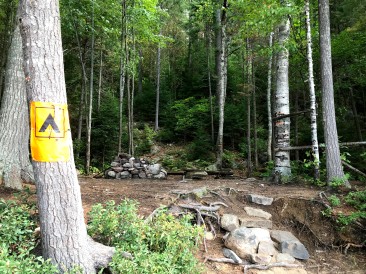 Looking up at the site from the beach 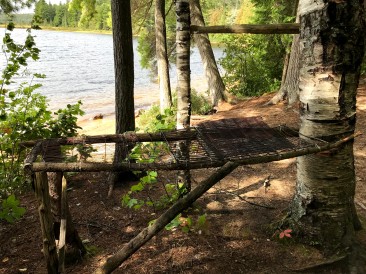 Accessories: There are a couple of log benches around the fire pit and some bushcraft counters roped into the nearby trees. Apart from that, not much.

Thunderbox: It’s to the north of the site, but not too far north. I actually missed it the first time I walked by it because it’s tucked away a bit on the hill side of the trail. I also missed it because it seems to be directly under two partially downed trees and I just assumed that the Park wouldn’t put the Thunderbox directly under two partially downed trees. So, my guess is the downed trees are recent. My guess is also that anyone using this thunderbox will be doing so very quickly, with one eye very firmly pointed towards the sky at all times.

Views: From the beach you’ve got a great view west along Booth. From the fire pit you’ve got a decent window down to the lake. Everywhere else it’s pretty obstructed by the treeline.

Notes: This isn’t a bad site. It wouldn’t be my first choice on Booth, but it wouldn’t be my last one either. I’m pretty sure that’s word for word what I said about Site 7 as well. I’d put Site 7 above this one. So, Booth ranking so far: Site 6, Site 7, Site 8, The middle of the lake in a lightning storm, Site 2.