I’ve visited this site quite a few times, but the pictures in this report are from a day trip I took up to Drummer/Little Drummer in September, 2017. Full disclosure, while I have walked around this site a bunch, I have never stayed here overnight. So keep that in mind when you’re reading the below report. Sure, it seems like this is a decent spot to stay for the night, but for all I know it gets infested with Lake Gremlins during the full moon. So consider yourself warned: there may be Lake Gremlins. But, if there aren’t. it’s a nice little spot.

Terrain: This is an island site and is relatively flat. I mean, it’s not totally flat. If it was totally flat then really it’d just be underwater, but the slight grade up from the canoe landing shouldn’t be too challenging for anyone who’s managed to make it over the 1.8 KM portage up from Gill Lake. The ground cover is a mix of grass and pine needles and, on my last visit, half burned Campbell’s tomato soup wrappers. The site goes up from the landing in a series of small clearings that include the site’s fire pit, tent spots and places to maybe work on your latest interpretive dance routine? I don’t know. What you do with yourself when you’re on Drummer Lake – Site 2 is entirely up to you. Just know that you’ll probably have the space to do it.

Canoe Landing:  From the water, the shore looks pretty rocky, but I found there to be a pretty clear and decent little harbour amongst those rocks. The underwater terrain is also rocky, so make sure you don’t ram the bottom of your boat if water levels are low, but apart from that it’s a decent spot to load/unload.

What a fun little harbour. Doesn’t it look fun? 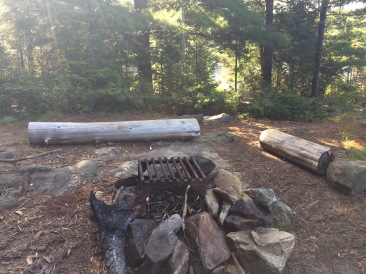 The fire pit. Also some logs and rocks.

Fire Pit: Not bad as far as fire pits go. Not great, either, but definitely serviceable. It comes complete with a standing grill that dominates the entire pit, and a couple of log benches from which to enjoy your fire/marvel at the rust levels of the aforementioned standing grill. At the time it was the site’s only grill and it gets a 0.5/5 on the “I’ll put something that’s going on my stomach on that” scale. Basically, this grill is why they invented tetanus shots and tinfoil.

You could totally put a tent here. 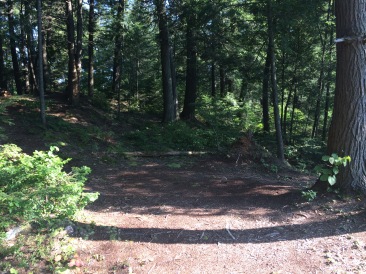 Tent Sites: There’s a nice grassy spot that’s reasonably level closer to the water/fire pit, and a couple of flattish clearings that are big enough for a tent (or maybe even two if you don’t mind getting cozy) further back. One thing: one of those clearings is relatively close to the Thunder box. It’s not the end of the world, but maybe don’t eat the chilli if you end up setting up your tent in that spot.

Thunderbox: So, as you might have guessed from the tent sites section, this isn’t the most private Thunder Box in the park. It’s kind of in-between two tent spots (so, yay proximity?) and it’s not exactly hard to see from a lot of places on the site. Still, it’s in decent condition, which, compared to some of the other Thunder Box options on Drummer/Little Drummer, is a huge bonus.

Accessories: Not really any, unless you count the sitting logs around the fire and the standing grill.

Swimability: Decently swimmable. It’s easy enough to slip in at the canoe landing, just keep an eye on where you’re putting your feet underwater since the terrain is pretty rocky. There are a few wide, flattish rocks along the shore that make for a nice place to sit in the sun and watch the water.

Views: From the canoe landing the view is west towards the narrows that lead into Little Drummer. Drummer isn’t a huge lake, so it’s not like you can see for miles, but what you can see is very pretty. The views from the interior of the campsite are either partly or completely obstructed by the trees and bushes. It makes for a decently private site, which is nice, because the three sites on Drummer are fairly close together and there’s definitely not as much privacy on the other two.