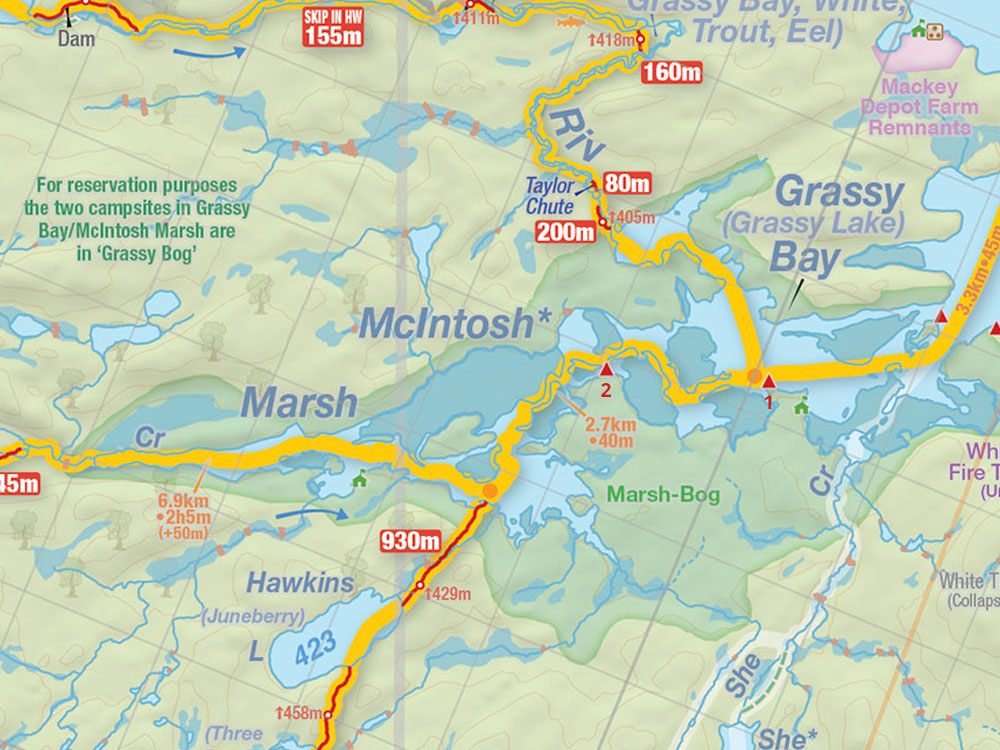 We stopped in on this site to shelter from a thunderstorm and eat some lunch. It proved adequate for both of these jobs. I don’t know how I’d feel about spending a more significant chunk of time here, but at the very least you’d be set for firewood. Basically, this is a small, seemingly little used site. There isn’t a ton of room for tents, and you’re in the middle of Grassy Bay so the swimming isn’t great. On the plus side, there are tons of blow downs around the site so you’re not going to be short firewood.

Terrain: The site is at the top of a small rise, about 20 feet above the water. The hill up from shore isn’t too treacherous or anything, but it is a climb. Ground in the immediate vicinity of the firepit is fairly flat and you could probably get a couple of tents set up if you don’t mind being close to your neighbour. There’s a neat rock outcrop that looks west from the site that’s worth checking out.

Looking up the hill from the canoe landing

The canoe landing and Grassy Bay

Canoe Landing: Not bad. The hill starts pretty much immediately, but there are a couple of roots and rocks along the water’s edge you can stand on to get stability while you climb in/out or load/unload. Underwater approach is free of obstacles but full of lily pads.

Fire Pit: A nice, basic fire pit in the middle of the site. Not much more than a circle of rocks, the walls are high enough that you’d be able to put a grill across them (provided you like your food cooked close to the flame).  The pit is fairly exposed to the elements, so if it’s raining prepare to spend a lot of time trying to shelter your fire.

The fire pit and “benches”

You want to swim here?

Swimability: I personally don’t love swimming in lily pads or muck. If you are someone who enjoys these things, then this is the spot for you. If you’re not, maybe try heading over to White Trout instead? I mean, you can wade in pretty easily from the shoreline, but why would you want to?

Tent Sites: Like I said, it’s pretty flat in the site proper, but that’s not exactly a huge space. You could probably fit a couple of tents there, but I wouldn’t suggest this site for more than that. I certainly wouldn’t suggest it for eight people and four tents, which is the size of the group we passed soon after leaving this site who had planned on spending the night there.

Thunderbox: As is usually the case in seemingly underused sites, the thunderbox is in pretty good shape. It’s back from the site and well hidden.

Accessories: A small stone table that is basically just rocks piled on top of other rocks and a couple of log “benches” that are only called benches because they’re where benches should be.

Views: From up top of the site there isn’t too much of a view of the water as you’re surrounded by trees. From the shoreline and canoe landing you’ve actually got a pretty nice view north across Grassy Bay. From that rocky outcrop I mentioned earlier you’ve got another nice view west.

Looking out at the bay from the site

Looking west from the rock outcrop.