I really liked this site. It’s nice and open, has great views, enough room for at least a couple of tents and just generally gives off good vibes.

Terrain: This is a hilly site. There’s an incline from the shore to the tent pad/ fire pit area, and then more of an incline up behind and around the site as well. Basically, flat space is the exception, not the rule. That being said, there is still plenty of flat space to make use of. There are quite a lot of exposed roots and tripping hazards, particularly between the water and the fire pit area. Ground cover is dead pine needles and dirt. 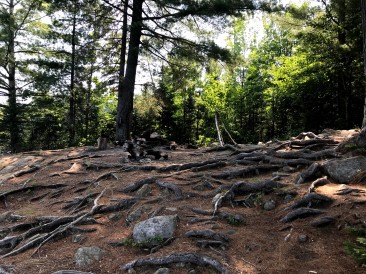 Looking up the site from the shoreline towards the fire pit

Looking down (and north west) from a nearby slope

Canoe Landing: I landed on the norther side of the point, beaching myself in between two wide, flat rocks that seem like they’ve been put there to cradle your canoe. The underwater approach was clear enough, I didn’t ram into any submerged rockbergs or dead heads, and the flat rocks make for a nice ledge to get in and out from. Unloading/loading might be a bit of a trick since the rocks don’t run the length of the canoe, but it’s a minor issue. More annoying would be the fact that it’s a good 10 foot climb with your gear over uneven terrain to get from the landing to the tent pad.

Not a bad canoe landing. Works for swimming too.

The fire pit. This isn’t a very good photo.

Fire Pit: It’s a solidly built fire pit with a higher wall on the side facing the water. This is good, because this is a very exposed site, and wind coming from pretty much any direction but east is going to blow right through the site and, potentially, your fire.

Swimability: Seems pretty swimmable to me. You could slip in near the canoe landing, or from any one of the dozens of shoreline ledges and rocky spots. There’s even a ledge on the south end that looks like it could be a candidate for jumping off of. (DISCLAIMER: Don’t do this based on this write up. I haven’t tested the depth. For all I know there’s a massive lake shark living under the ledge, or, more likely, hidden rocks and other things just waiting to break your legs, or worse. Never jump from a ledge unless you’ve thoroughly scouted the area underneath. Please.).

Tent Sites: There’s a wide, flat area up behind the fire pit that would be good for at least a couple of tents. There are intermittent rockbergs poking up through the pine needles, so you’ll have to watch where you set up, but beyond that this is a pretty good spot for tents. Also, if you’re into hammocks, the trees on the south side of the site are pretty much put there to string a hammock.

Thunderbox: Not a huge distance from the site, but far enough away that you’ve got some privacy. It’s nestled in its own little clearing and looked to be in good enough shape. I dunno. It’s a place to poop.

Accessories: Beyond a very rickety looking tepee thing near the fire pit that has probably already blown over, not much. There weren’t even any of the usual log “benches” you find on most sites.

Views: Decent views to the north, west and east. The tree cover along the shoreline is sparse, so you can see the lake from most parts of the site. Down by the water’s edge you’ve got a great view up Little Doe as well as across the narrows towards a small island and a reedy bay behind it that I bet is great for moose.

Taking in the view from hammock central

Looking towards the Little Oxtongue

Notes: I liked this site. If I were to stay on Little Doe it would definitely be an option. Unlike other sites I can name. Ahem. Looking at you, site 1.

Related Trip Report: A Night On Tom Thomson
Back to Campsite Reports