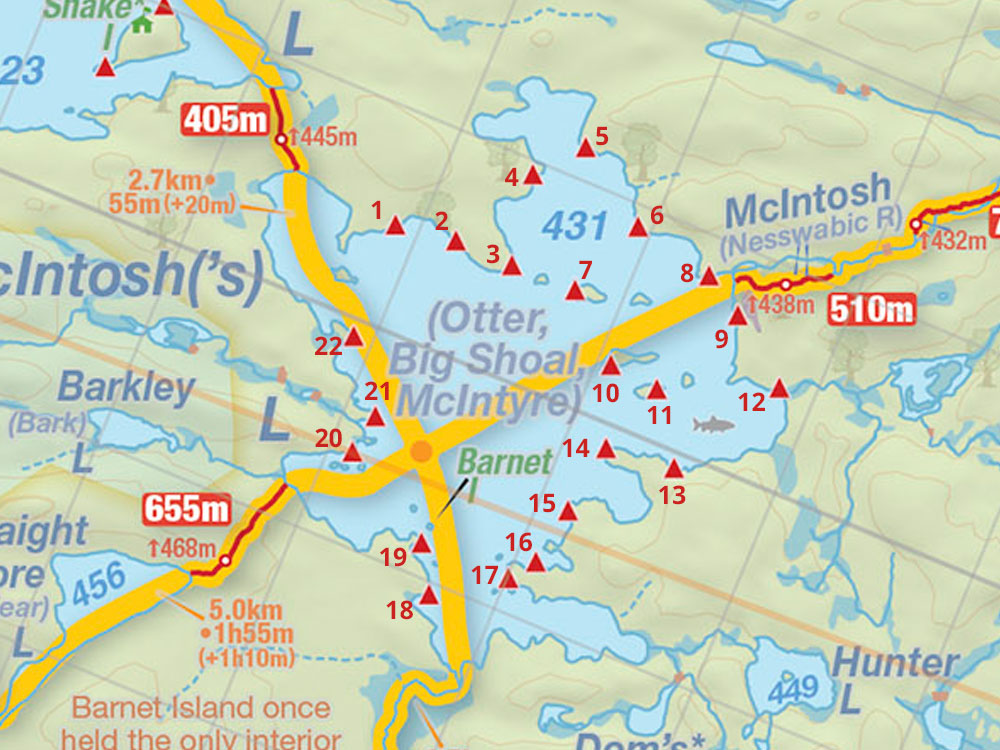 This site is a solid B in my opinion. It’s got a few things going for it (big, nice firepit and views, tiny little beach) and a few things going against it (close to some boggy stuff, feels enclosed, that beach gets pretty weedy).

Terrain: About 50% of the site is pretty flat and compact. It rises to the north and there’s a secret (BUT NOT SECRET ANYMORE!) tent spot up the top of the hill that’s good for a bigger tent. Immediately east of the site it gets pretty marshy, meaning that the bugs are probably pretty bad during June and July.

Looking through the site to the North

Canoe Landing: There are two canoe landing spots. There’s one on the west facing shore right by the campsite sign that looks like it should be the primary unloading area. We used this one, and it’s fine, although if you want to keep your feet wet it’s not ideal. Not as visible from the water is a small beach that faces south(ish) just around the point. This is a much better spot for loading/unloading.

Fire Pit: A nice, sheltered pit with high enough walls that you can reflect some heat back and dry out any wet gear. As a bonus, there are plenty of nearby trees you can tie a tarp to if you’re trying to avoid the rain while sitting by the fire.

Swimability: The beach makes for a nice entry, but its near the marshy bit which means while you’re walking out on sand, you’re walking out through more than a few water plants. How much of a problem this is is going to depend on your personal ick factor as far as floating green stuff is concerned.

Tent Sites: Space for three or four good sized tents spread out around the site. The flattest part also looks like the dampest, and it’s close to the marshy part I mentioned earlier. Could be a problem in July, didn’t seem to matter in September.

Probably the least flat site we used. Looks worse than it is.

Hooray! Thunderbox (secret uphill tent site is to the right of this picture).

Thunderbox: Up the hill to the north. It’s in pretty good condition. Kind of close to the secret tent spot I mentioned a few minutes ago, but that’s more of a problem for the people in that tent than it is for you.

Accessories: A couple of decent log benches around the fire pit and that’s about it.

Looking south towards the beachy area

Views: The site is fairly enclosed. Trees grow around most of the shoreline, meaning when you’re on the site you can forget that you’re only steps away from a very pretty lake. There are a couple of breaks in the treeline where you can sit and watch the water, and that view is very nice (westward view, it gets a great sunset). There’s also a cool sideways growing root that doubles as a bench at one of these breaks, make sure to give it a sit as the sun goes down, it’s an awesome little spot.

Notes: All in all, this site is definitely worth checking out in the late season, might be a pass in the early season when the bugs are bad.