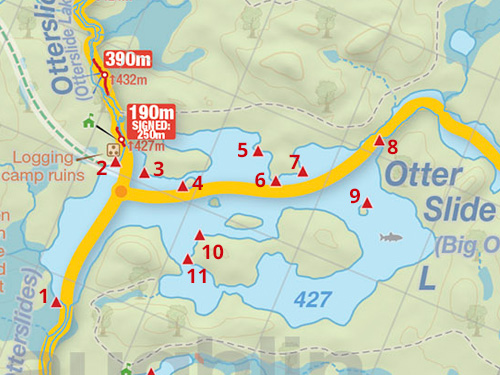 This is the first site coming into Otterslide from Little Otterslide. It’s kind of off by itself at the south end of the lake and doesn’t look like much from the water. That impression stays true once you’re actually on it. It’s a pretty small, basic spot. However, it’s definitely useable with enough space for three tents, as long as you’re not too picky about things like flat ground. Probably because it’s not that impressive looking, this seems like a fairly underused site, which is a blessing in early September as we were able to find quite a lot of decent firewood nearby.

Terrain: This is a small-ish site. It’s slightly uneven in many spots, but not enough that it’s too much of a hassle. There’s a nice big pine in the middle of the site that provides both decent cover from the elements and a nice bed of dead pine needles.

Canoe Landing: There isn’t a natural spot to pull up the bow of the boat, but you can come in sideways and use a couple of low roots and rocks to get in and out. The underwater approach is basically nothing but sand, so no worries on scraping your canoe or hitting any rockbergs.

Fire Pit: A pretty basic but serviceable fire pit. It’s very close to the water so you’ve got a nice if slightly obstructed view out to the lake and the far shore.

Swimability: The sandy bottom is mixed in with a lot of rotting … something? I’m guessing leaves and pine cones. It’s great for walking in gradually, but I’d recommend swim shoes depending on your ick threshold.

Tent Sites: We were able to get three tents on this site. I think only one of them was level, but speaking as someone who set up on a slant, it wasn’t really that noticeable once I was in the tent.

Thunderbox: As with most sites that don’t get a ton of traffic, the thunderbox was in pretty good condition. It’s a short walk back of the site. Might not be an ideal spot during bug season, but worked well in early September.

Accessories: The benches around the fire pit are in pretty good shape and work well as prep areas and Euchre zones. Apart from that, not much.

Views: You’ve got a semi-obstructed view north and east from the fire pit and the shore just above the canoe take out area is a nice place to set up your canoe and watch the water. There’s moderate tree coverage along most of the shore, so while you can see that the water is there you’re somewhat protected from an onshore breeze.

Notes: This was a decent enough site. I’d probably rate it a B- or a C+. It worked for a one night stopover, but I wouldn’t want a trip that strung together a bunch of similar type sites.