This is a decent campsite. I visited it with my son and daughter and it worked well as a place to stay with young kids. There’s a wide, rocky beach and some nearby raspberry bushes to help keep them entertained and it’s not too hard to get to from the nearest access point, while still being far enough away that you feel like you’ve got some seclusion. It’s definitely not one of the best site I’ve ever stayed on, but it’s not one of the worst either. Basically, if we’re putting this in terms of Bachelor leads, it’s not the Ben Higgins of sites, but it’s not the Juan Pablo of sites either. It’s like the Nick Viall of sites, I guess?

Standing beside the fire pit, looking down at the beach 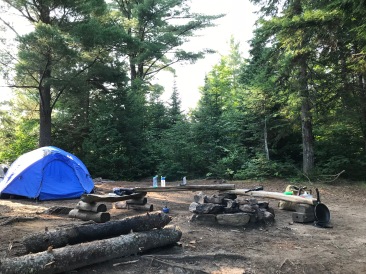 Terrain: Flat and clear. There’s a small slope up from the beach landing to the site proper, but unless you’re a two year old running flat out down it with your eyes half closed, you’ll probably manage it okay. There are two spots to climb from the beach up to the site, one of which actually has stairs built into the ground. The rest of the site is flat, easily navigable terrain.

The fire pit with the canoe landing down to the left 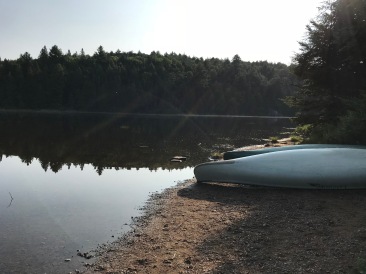 Lots of space for your boat.

Canoe Landing: There’s a wide, rocky beach fronting the north side of the site. As you might imagine, this makes for a very easy spot to pull the boat up and load/unload. Underwater approach is relatively free of obstacles, apart from a couple of larger rocks poking out of the waterline here and there.

Fire Pit: The fire pit’s in good shape. It’s got relatively high, relatively solidly built walls. There’s a stand of trees and brush that sit between it and the water, meaning the views when you’re sitting around the fire aren’t that great. It also means, I imagine, that between the high walls of the pit and the windbreak from the trees, your fire will be relatively well sheltered through the night. There’s one stand up grill that comes with the site that makes for a good prep table but is a zero out of five on the “I’m not putting something that’s going in my stomach on that thing” scale.

Tent Sites: Spots for at least three 2-3 man tents, with at least one of those spots being big enough for something larger. The ground is pretty flat, so you’re probably going to be okay no matter where you try to pitch your tent, but the clear area between the fire pit and the southernmost steps down to the beach was probably the best spot. 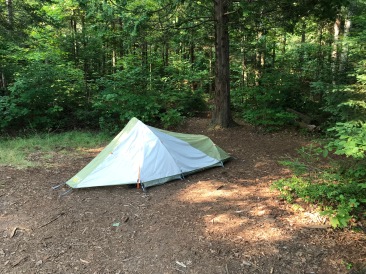 Swimability: The beach should make this site very swimmable, but there was something kind of yucky about the area right in front of the site. There were a few lily pads and the underwater terrain seemed kind of slimy. I actually paddled the canoe out into the lake and did an air raid rather than wade in from the shore.

Thunderbox: This ain’t no thunderbox, it’s a Thunder House. It’s always nice to have a roof over your head in case of rain, but fair warning, this little building smells. I wouldn’t close the door.

Accessories: Beyond the well built log benches surrounding the fire pit and the stand up grill, the site doesn’t come with a bunch of accessories. It does, however, come with some raspberry bushes that you can access by wandering out the back of the site and across the nearby access road. These bushes alone probably made this site my kids’ favourite one of all time (my son was also a huge fan of the Thunder House).

Views: It’s got a really nice view up Potter Lake from the beach. Apart from that, the shoreline is fairly enclosed with lots of trees in between you and the lake. Once you’re on the site proper the views are fairly restricted.

Notes: This site was fine. It’s a good spot to stay with kids, but probably wouldn’t be my first choice if I was on a solo trip.