Most people who start a canoe trip from Canoe Lake will either head north to Joe Lake and beyond or south through Smoke Lake. The routes in either direction can be both short and relatively easy for beginning trippers, or provide well maintained access to the broader park for more experienced campers. But, for those who want to experience the thrill of clambering over downed trees with a canoe on your back and a nagging suspicion that you left the portage 200 metres ago and are now following a game trail leading directly to the annual hungry bear and angry wolfpack jamboree, there is a third option: head west to Drummer Lake and the other (absolutely gorgeous) lakes of the Ahmek District.

For this trip, I was joined by a friend of mine. It was great having him along and I recommend anyone doing this route bring a buddy who can act as a second set of eyes when the portage disappears or, at the very least, keep you company as you wander into the aforementioned bear/wolf jamboree.

A quick word up front for anyone reading this looking for ideas for a trip: while I highly recommend people experience the lakes west of Canoe Lake, it is not easy getting up there. The portages are relatively long with lots of ups and downs and, at least as of this past weekend, could really use some TLC (Tender Loving Chainsawing). That being said, if you are comfortable with portaging and want to see some beautiful lakes with lots of privacy, you can’t do much better than the Ahmek District.

We hit the water on Canoe Lake just after what would have been sunrise if not for the layer of clouds overhead. We paddled south under a uniformly grey sky to the western jump off from Canoe Lake, a 455m portage up to Sam Lake. The portage begins at the start of the narrows leading down through Bonita to Tea Lake. I’ve already done a post on the first few lakes on this route, and if you want my thoughts on Sam through Tonakela Lakes, you can check them out there.

By the time we reached Drummer the clouds were starting to break up, and, by the time we reached the end of Tonakela and the start of the portage up to Thunder, it was clear that it was going to be another beautiful day. It was also clear, we realized as my buddy sank up to his knee in a patch of mud on that portage, that it was going to be a challenging day. Almost every portage along our route offered some kind of obstacle. Whether it was downed trees across the path, inconveniently placed swamps, steep uphill and downhill climbs or trails that just plain disappeared, there’s a reason the portages in this part of the park are marked as low maintenance, and it’s not because they’re happy to spend Friday nights at home with Netflix and a bottle of wine. 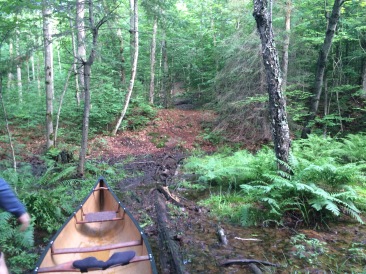 Thunder Lake Portage. Anyone looking for mud, this is a great place to start. 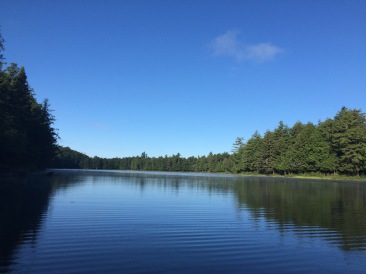 Thunder Lake. Anyone looking for pretty, this is a good place to start.

We arrived at Thunder as the last wisps of morning mist were rising from the water and the sun had bathed the lake in a warm glow. So, uh, it was pretty. I’ve heard that Thunder is a great fishing lake. Full disclosure, I rank fish somewhere between rocks and other, bigger, rocks on the list of things I’m interested in eating, so fishing has never held much attraction for me. However, if you are someone whose palate didn’t stop developing when they were four, or you just like to relax with a fishing rod and a beer in the sun, I’ve heard Thunder is a great place to drop a lure.

The portage from Thunder to Panther is fairly short, 335m according to my Jeff’s Map, and not that difficult. Apart from a poorly placed tree down across the end of the portage, I don’t remember too many obstacles along the way. And, despite the lake’s name, there was a distressing lack of giant cats. Saw a chipmunk though. What we did find was another very pretty lake (so this doesn’t get repetitive, let’s just assume that for the rest of this trip all the lakes are pretty. Because they are.¹) We stopped on Panther’s lone camp site because I wanted to see if I could find the remains of an old lean-to highlighted on the map. I wasn’t able to find the lean-to, but I did find a root fire waiting to happen. I don’t know who decided to build the site’s fire pit at the base of an old pine tree, but whoever they are they should probably go back to Fire Pit Placement School for another semester or two and really dig into the “ways not to burn down the forest” section.

Mossy and Telma were the next lakes on our route. If Mossy is a small-to-mid sized lake, Telma would be considered a mid-to-large sized puddle. Both are very scenic. So scenic, in fact, that you might almost miss the portage out of Telma to Oak Lake because you’re too busy admiring the view. Not that this happened to us. No. Not at all. Fortunately, we did see the yellow portage sign before paddling into the reeds at the other end of Telma, and made our way over to Oak Lake in short order.

Oak was the halfway point of this trip. It isn’t necessarily the most accessible lake by canoe, longish portages lead into it from the north and south, it’s a four hour one way trip from Canoe Lake and there are no campsites available to canoe trippers (there are, however, two backpacker sites close to the portage between Oak and White Spruce). Even so, this lake is a must visit as far as I’m concerned. When we arrived there was a solitary loon floating in the middle of the lake, calling over and over and listening to the echo of its cry bounce off the surrounding shores. It was easily one of the most peaceful scenes I have ever come across. It was a wonderful place to take a break on the water and really enjoy being alone in such a secluded spot.

The portage between Oak and White Spruce was, unusually for this trip, flat, wide and well-maintained. This was a huge relief after a morning spent pushing through portages that were, generally, the opposite of flat, wide and well-maintained.  As I put the boat in on White Spruce I even let myself hope for a few minutes that this portage was a sign of things to come and that the portages back along the southern edge of the loop would be less stabby. Oh Drew.

There are technically two portages between E.U. and Dace Lake. The map promises an easy 55m lift over to a small pond, followed by a short paddle and a somewhat more challenging, but still short by Ahmek District standards, 485m into Dace Lake. The map lies. The start of the first portage leading off of E.U. Lake is hidden by a creek at the end of a lily pad filled bay in the south east corner of E.U. The portage sign is extremely difficult to see from the water, mostly because the tree it’s attached to is no longer standing upright and the start of the portage is completely grown over. We ended up dragging up the creek as far as we could go before realizing that we’d somehow missed the start of the portage. After a few minutes of pushing through chest wild high raspberry bushes I found the actual trail and, once the bleeding from a thousand raspberry bush scratches had subsided enough that I could stand up again, we pushed on across the portage. 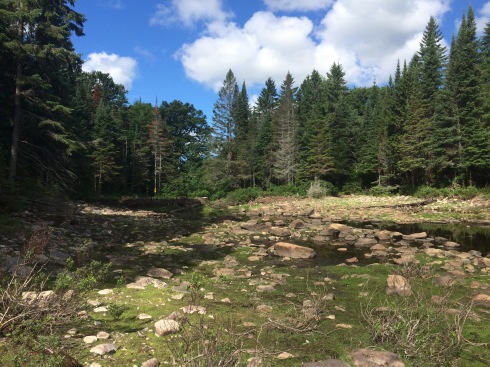 This is a body of water according to the map. 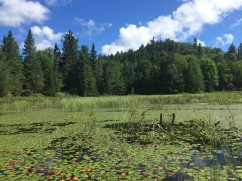 The bay leading out of E.U. Lake. 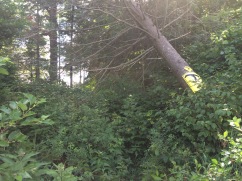 Can you see the portage? 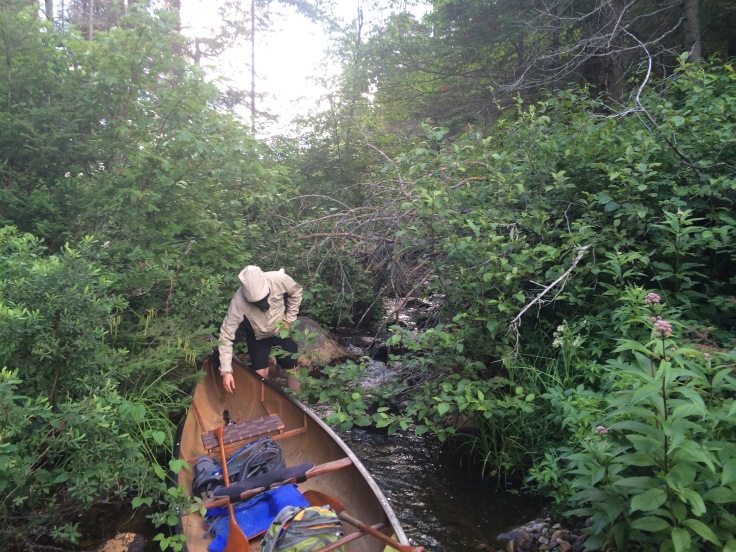 Turns out this was not the right way to go.

The map warns that low water levels between E.U. and Dace can be a problem, and in this case the map did not lie at all. There were low water levels in the pond between E.U. and Dace, and it was a problem. After reviewing our options (1. Try to paddle across a half inch skim of water, 2. Carry the canoe around the outside of the pond and hope to not get swallowed up by the quicksand/mud, 3. Cry.) we decided to go with option 2. And a little of option 3. The ground along the outside of the pond was solid in some places and decidedly unsolid in others. It was relatively slow working around the pond, but eventually we made it to the start of the portage into Dace. Or, more accurately, we made it to a portage sign with the words “Dace Lake” and “485m” on it, but with no indication of an actual portage in the overgrown brush. As I waded into the ferns where the portage should have been it felt like I was more likely to run into a raptor than I was to find the trail.

Eventually we bushwhacked our way through Algonquin’s answer to Jurassic Park and came out on Dace Lake, happy to put the most difficult portage of the day behind us. Except, it turned out, that the most difficult portage of the day was directly in front of us. The portage between Dace and Ramona isn’t as overgrown as the one that comes before it, but what it lacks in vegetation it makes up for in elevation. There is a not insignificant amount of climbing on this trail, and the up and down makes the 1,065m portage feel twice as long. It was as if the God of Portages (Portagmagon) took a look at that stretch between E.U. and Ramona and thought to himself “I am going to fuuuuuck with those guys”. I have never been happier to reach the other end of a portage than I was when Ramona finally came into sight.

Ramona is home to a number of backpacking camp sites but no canoe accessible sites. Namakootchie, the next lake and last new lake on this trip, has one unmaintained campsite that we weren’t able to find (although by this point we weren’t looking that hard either). From Namakootchie there was one final new portage back into Little Drummer, and then back to Canoe Lake along the Drummer/Sam/Gill corridor.

All in all, it was a challenging day. We covered about 24 km, half of which was portaging. Despite the increased difficulty of the route, I highly recommend checking out this part of the park. This might come as a shock, but having that many long, poorly maintained portages along a route means that the potential for solitude is high. If you want some seclusion, and are comfortable with portaging, this is a great route. Except maybe the E.U. to Dace part. That part sucks.

¹. Except Dace Lake. Dace Lake is the Cinderella’s ugly stepsister of all the lakes at the Ahmek District ball.

². This total includes Bonita Lake and Tea Lake, which I paddled the day before on what was supposed to be a relaxing family paddle with my wife and kids. Protip for anyone contemplating such a paddle: You’ve got about half an hour before an 18 month old gets bored and starts trying to throw everything that’s not strapped down in the canoe, including himself, overboard.