For those not familiar with The Barron Canyon, it is located on the east side of Algonquin through the Sand Lake gate (just west of Pembroke). It’s about a three hour drive from Ottawa to the main canoe tripping access point, and it’s worth every minute on the road. For this trip I was joined by the same buddy who came with me on my Ahmek District tour. Apparently I wasn’t able to scare him off the first time. We drove up from Ottawa on a Saturday morning and arrived at the Grand Lake/Achray access point at around 8:30. Immediately upon arriving at Grand Lake you can tell you’re in for a different kind of Algonquin experience than you’d get in the west or along the highway 60 corridor. The shoreline is rockier and there are hills rising in the distance. The vegetation is different too; the trees are smaller, the soil is looser and there are a lot more blowdowns than you’d see elsewhere. The net result is something beautiful and unique (I’m not the only one who thinks this, Tom Thomson spent most of his last few summers in this area and it’s where he painted some of his most famous works. Me and Tom, twinsies.).

We set off across Grand for the Stratton Lake portage. The portage itself is at the end of a small inlet, the entrance to which is hard to pick out along the shoreline until you’re right on it. The portage isn’t much to speak of, it’s marked as 50 meters on Jeff’s Map and feels half as long. There’s a very short river paddle (like, Hobbit short), then you pass under an old rail bridge and out onto Stratton Lake, which is not very short (If the river paddle is like a Hobbit then Stratton Lake is like a pyramid of Ents, all of whom played varsity basketball for their high school team). As we reached the midpoint on Stratton my buddy told me a story about paddling against a headwind on a lake about the same size of Stratton, and we both agreed that we were lucky the day was so calm. At this point Blowy the Wind God, who is a big fan of headwinds and didn’t appreciate our casual dismissal of the concept, put a note in his calendar to order one up for the next morning, but more on that later.

The portage between Stratton and St. Andrews is also very short. St. Andrews itself is kinda shaped like a feather duster in mid dust. This is important information if you’ve been compiling a list of natural formations that look like feather dusters. If you haven’t, you’re way behind. Once on St. Andrews you can choose to either head north towards High Falls Lake or east towards Marie Lake (you can also go South, but since I didn’t got that way I refuse to acknowledge it as an option). Our route took us north to High Falls, although at the end of our trip we’d be coming out from Marie Lake, so don’t worry too much if you’ve been waiting on the edge of your seat for my opinion of the hellscape that is the portage from St. Andrews to Marie.

At the start of the portage between St. Andrews and High Falls there is an old sunken pointer boat with its bow sticking up out of the water. Pointer boats were used during Algonquin’s logging heyday, a period you can learn a whole lot more about at the Algonquin Logging Museum and, if I ever get my act together, my future blog post about my recent visit to that museum. Based on my exhaustive research into the subject, I would say that these boats, while wildly efficient when floating on the water, became significantly less so when sunk underneath the water as this one was. It’s safe to say that this boat’s pointing days (or whatever it did) are behind it and it now stands as a grim warning to all other boats that might come its way. Also, it looks pretty cool sticking out of the water like that.

The portage into High Falls isn’t that long, 595m according to Jeff’s Map, but it feels longer. Like many of the portages in this area, it is fairly rocky with some up and down. The portages are all as well maintained as they can be, there aren’t many downed trees or moveable obstacles, but the ground itself is a challenge. High Falls Lake itself has had its own challenges recently. A large forest fire in mid-August has left the western shore charred and damaged. When we were paddling through there were still crews working in the woods and the portage between High Falls and the Cascades is the site of a large camp that I am guessing is where the people fighting the fire had set up shop. I said this on my Instagram, but it bears repeating, be careful with your campfires. It doesn’t take much to really screw things up.

After High Falls we went up through a series of small waterfalls and lakes (ponds, really) on the Barron River called the Cascades. This is a beautiful route to follow and I highly recommend it. There’re are a few portages along the way, but it’s worth it. Each waterfall is prettier than the one that came before it, and, if you follow the river through Brigham Lake and past Brigham Chute, you come to the Barron Canyon, the 9th Wonder of the Natural World¹.

Paddling through the Canyon is an exercise in wonder. The Canyon walls tower overhead; a rock climber’s dream and a Cremnophobe’s nightmare. Overhead a group of three birds (no idea what they were. Definitely not pigeons) were taking turns gliding from side to side of the canyon, laughing merrily at my attempts to get a decent picture of them with my iPhone camera. When I looked back over my pictures, all I had were black spots against the blue sky. Majestic black spots, but black spots nonetheless. We drifted through the Canyon until we’d had enough, then turned back for Brigham Lake and the final leg of that day’s journey.

From Brigham we portaged down to Opalescent. Opalescent is home to the famous stone bench and a surprising number of campsites given that it’s a relatively small lake. A few of the campsites look very nice, buy I get the feeling it might get a bit claustrophobic if all of the sites on the lake are in use, as they were meant to be that night. One of the other things that jumped out at me about Opalescent was the number of blowdowns along the shore. As I mentioned at the outset, these downed trees seem to be a feature of this part of the park. Like fuzzy dice or tail fins, it’s not exactly a feature I love, since it leaves you wondering if the trees on your campsite are going to blow over in a stiff breeze (the answer to that, as we learned, is yes, but more on that later). However, the dirt and mud clogged roots sticking up from the ground at right angles does make for some pretty striking lakeside scenery as you paddle past. 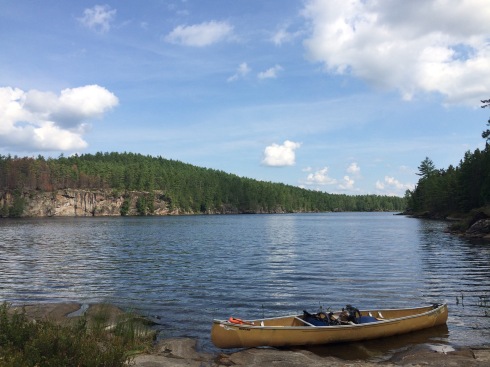 Cork Lake is the best. 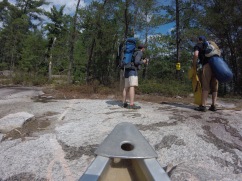 Getting ready for the last portage from Opalescent to Cork

One of the many blowdowns on the trip.

The final portage of that day was a 675m into Cork Lake. As with pretty much every portage since we left St. Andrews, this one was rocky, uneven, and a serious pain in the ass. Added to the discomfort is the fact that you can see Cork from about the halfway point of the portage, making you feel like you’re closer to the end than you actually are. The good news is that Cork Lake is well worth the effort. More than worth it. In fact, I think Cork ranks as one of the top three lakes I visited this summer. And our site on it ranks at number one by a country mile. It’s the Katie Ledecky of campsites. In fact, I’m going to stop right here and give you a chance to go book yourself a night on Cork Lake before you read another word. Don’t worry, I’ll wait. I’ve got the premiere issue of “Perfect Campsites and Pictures of Small Dogs Wearing Hats” to work on while you do.

To be continued in Barron Canyon Bound – Part Two. Which is already posted. Hooray!