There’s something bittersweet about realizing you are close to reaching a goal you’ve been working towards for a while. There’s both a sense of accomplishment and a sense of sadness in realizing that this thing you’ve been working on is almost at an end. Kind of like when there’s three bites left in an ice cream cone and you suddenly realize your future is about to be devastatingly free of chocolate mousse royale. That’s partially what I was feeling as I traced out the route that would take me from Canoe Lake to Lake Opeongo and over the 100 lakes mark for the summer. Other things I was feeling included: excitement at the thought of paddling Opeongo, nervousness at the thought of paddling Opeongo in a headwind, hunger that was unrelated to the thought of paddling Opengo (unless we’re talking about some kind of metaphorical or spiritual hunger, but we’re not. It was mostly hunger for ice cream).

As per usual, I started this trip from Canoe Lake. I left the dock with the sun poking above the horizon, enjoying the perfectly still water and the promise of a good day for tripping. As I paddled down Canoe Lake a fog rolled in, spilling over the trees behind Senior Wap island like it was auditioning for a part in The Mist. I kept ahead of the fog as I made my way down to, and across, the Joe Lake portage, but it caught up with me as I reached the end of the east arm of Joe Lake, right about where the narrows between Joe and Little Joe start. The good news is that this particular fog wasn’t filled with multi tentacled monsters from another dimension. The bad news is that as I stopped to get my bearings I realized that I had packed my Eastern Map instead of my Western map and, as it turns out, you can’t turn an eastern map into a western map just by turning it upside down and screaming “why aren’t you the western map?”. I ended up paddling up to one of the campsites across from Arowhon Pines and asking the guys who were camping there if I could take pictures of their map. Personally, I don’t know how I’d react to some random guy paddling out of the mist at 7:00 in the morning with his camera clutched between shaking hands, asking if he can take pictures of my stuff, but these guys were awesome. Pictures taken, I muttered a prayer to Chargor, God of Cell Phone Battery Life, that my phone wouldn’t die before I reached Happy Isle, and set back off on Little Joe.

The northern end of Little Joe leads into a short river before the portage to Baby Joe and Lost Joe. The mouth of that river is home to a bazillion lily pads and other water plants. On this particular morning, it was also  home to a good sized moose enjoying its morning meal. Say what you want about an animal that chooses soggy plant life over bacon and eggs for breakfast, it’s pretty awesome to see it happening up close. Awesome and a little frightening as the moose clearly wasn’t interested in interrupting its meal to let me pass. This was a problem in that in order to get to the river I had to paddle within about ten feet of the moose. As I’ve said before, I have a healthy respect for moose (strong, stupid and irritable is a bad combination) and try not to get too close to them if I see them in the wild. I tried making some noise to frighten it off, but that had zero impact. It just kept on eating after shooting me a look that clearly said “shut up you weird looking noisy beaver”. Eventually, I gave up on waiting and ended up paddling past the moose who, fortunately, at no point decided that I was a) a threat or b) a new and delicious form of water plant it had to try.

On the portage between Little Joe and Baby Joe you can stop at about the halfway point on another small lake, Lost Joe. I hadn’t done that on my first trip through this part of the park and decided to fix that this time around. There isn’t really much to say about Lost Joe. It’s small, there are a couple of camp sites and the naming committee had clearly checked out when it came time to name it. To me this would only be a destination if every other lake in the area was booked out.

After checking out Lost Joe I continued on through Baby Joe and across the portage onto Burnt Island Lake. From here on out I was in uncharted territory. Well, not actually uncharted. In fact, it’s very well charted. Like, super well. I’d even been there before. But that was over 15 years ago and a lot can change in 15 years (See: Spears, Britney, career of). My only real memory of Burnt Island was that it was really big, and, unlike a lot of my memories from when I was 20 years old, this one turned out to be reliable. The fog had lifted by this point, leaving behind a beautiful sunny sky. I worked my way down Burnt, pausing every once in a while to enjoy the scenery. There are many, many camp sites on Burnt, most of which were occupied this particular morning. The water is clear and the majority of the sites I saw had ample room for tents, hammocks and other essential gear (if by essential gear you mean one of the most extensive and diverse collections of camp chairs I’ve ever seen collected on one site). Assuming you book far enough ahead, this would be a great lake for the first night of a longer trip. 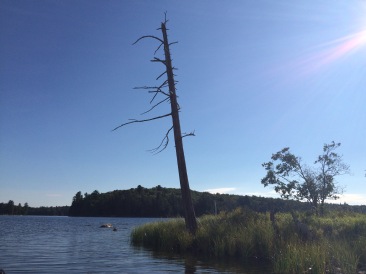 The tip of a small island at about the halfway point on Burnt. Still a long way to go. 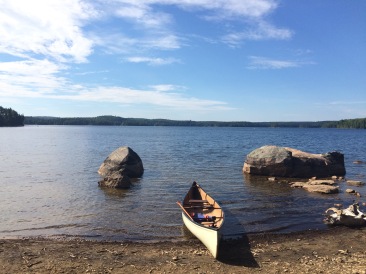 The start of the portage from Burnt to Little Otterslide. There’s rocks. And a beach. It should be hard to miss.

The portage over to Little Otterslide Lake is smack in the middle of the eastern shore on Burnt Island. The put-in is a wide, sandy area that looks exactly like the start of a portage. The sign isn’t super visible from the water, which I guess is the only excuse I have as to why I had trouble finding it until I was pretty much right on it. Regardless, once you find it, it’s a decent, well-maintained portage without too much up or down.

Little Otterslide is dominated by a large island in the middle of the lake. The sites here looked pretty nice as well, which I guess makes sense as this entire part of the park is very well travelled and likely high on the Park’s “keep things pretty” list (at the bottom of that list: Furrow Lake, but more on that in another post).  It is connected to Otterslide Lake by a short river, the entrance to which is guarded by some very tall pine trees that loom over the water and give an idea of what the forests in these parts might have looked like a couple of hundred years ago, before the loggers set up shop (in fact, according to Jeff’s Map, there was an old logging camp at this spot). My only complaint about the Otterslides as a whole is that there was a noticeable lack of both otters and otter appropriate playground equipment on either of the lakes or the creek in between. Other than that, they’re awesome.

The final leg of this day was a series of longish portages and shortish lakes between the Otterslides and Happy Isle. The first portage is a 540m that takes you into a small body of water called Mike’s Lake on Jeff’s Map. Because this is an unofficial name I’m going to go ahead and rechristen in Beaverswing Pond. Sorry Jeff. Either way, it’s actually a very pretty little lake. You have to follow a short creek (that feels a lot longer than short when you’re actually paddling through it) to get to the next portage, a 1.8 km trek over to Shiner Lake.

The Shiner portage starts and ends with a long series of relatively narrow boardwalks, which make for very even terrain but can cause problems when you run into someone coming the other way, as I did, twice. It turned out that I was sharing this particular portage with a group from Camp Queen Elizabeth, a camp on Georgian Bay that I have to admit I had never heard of before meeting this group. I was impressed, however, by how friendly the staff were, and even more impressed that they were actually tripping with a wannigan. If you’ve never heard of a wannigan (first of all, good for you), picture a wooden box shaped like a picnic cooler, make it heavy as fuck, fill it with food and tie a leather strap to it that you  loop around your forehead while supporting the box on your back. Then swear a bunch and cry a little, and you’ll know what it’s like to trip with a wannigan.  Anyways, this trip was using one and the counsellor carrying it was actually smiling, so consider me impressed.

Shiner Lake and the final portage into Happy Isle passed in a bit of a blur as I was mostly just eager to get them over with. Why? Because Happy Isle marked my stopping point for the night and, more importantly, my 100th lake for the summer (cue the fireworks, confetti shower and balloon avalanche). I have to admit, I was pretty happy as I finished the last steps of the portage onto Happy Isle and put my canoe in the water. It had been a fantastic summer of tripping and, while I always considered my goal doable, it had also seemed like a bit of an ethereal target; a number that was hovering out there that I’d cross someday, but not today. Except that today I did cross it, and it was awesome.

Continued in The Home Stretch – Part Two: Opeongohmgod. Which is already published, hooray!