This is a really nice island site. It’s right in the middle of Fork’s southern bay and is by far the better of the two options on Fork. Stay here.

Terrain: The island is pretty much all rock with a layer of dirt in some places (which, when you think about it, is pretty much what all terrain is everywhere). At its highest you’re about ten feet above water level. The ground is fairly clear around most of the island and there is plenty of level space. Tree coverage is moderate. There’s only one spot that feels like it’s at all sheltered from the lake.

Canoe Landing: Kind of a weird one, as you can pull your canoe up at multiple spots around the island. In each case, the landing is fine. The rock slopes into the water on a decent angle, so I found it easier to pull up parallel to the shore and unload that way. If you choose to unload at what I would consider the main landing area, the slope of southeast facing rock by the fire pit, there are a couple of decent spots where the rock levels out and makes it easier to get in and out.

Fire Pit: This is a nice sized pit on the south end of the island. You’ve got a good view towards the Rose Lake portage and the bay beyond. The pit itself is well protected by a high rock wall, which is good, because it’s also very exposed to the elements. 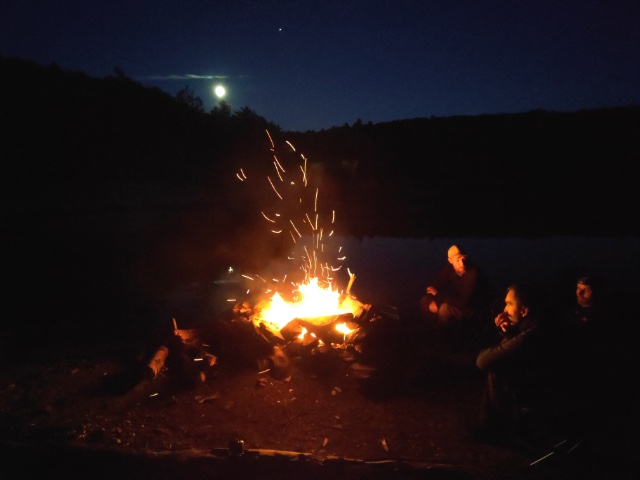 Swimmability: As with landing the canoe, there are multiple spots where you can take a dip. I swam from the west side mostly and found that to be a decent entry/exit area. One word of warning, there are lots of rocks just under the surface around here. Don’t jump in without checking. I slipped on my way in and narrowly missed landing right on a large underwater boulder. One thing, this site gets great afternoon sun. On a sunny day you feel like you’re standing in an oven. I dried off in no time on those rocks. 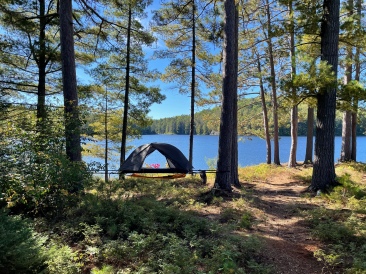 Tent Sites: It’s a large, flat island. You’re going to find a spot for your tent. (What, you want more? Fine. There are three or four decent spots near the fire pit, including one just behind the sites lone counter that is reasonably sheltered. Finding a spot to hang my hammock tent was actually a bit of a challenge as while there a lot of trees that look like they’d be perfect, I found most spots were just slightly off).

Thunderbox: So, remember when I said it’s a large island? Large is relative. It feels large when you’re thinking about it in comparison to the size of a lot of other sites. It feels very small when you’re sitting on the site’s thunderbox which is smack in the middle of the island and can be seen pretty clearly from most spots on the island (including the spot where I ended up hanging my tent). That said, it’s a decent box and in good shape. 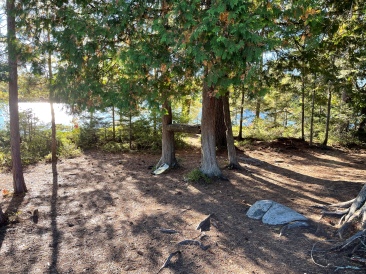 Accessories: There’s a small counter tacked between two trees in the fire pit area. Apart from that, not much. Apart from the quick dry over that is the site’s west side.

Views: 360 degree views depending on where you’re standing on the island. The sunrise and sunset views are both quite nice, and the star watching from the fire pit area is awesome.

Notes: What can I say, I liked this site a lot. Definitely one of the better ones I visited this year.