This site is fine. It’s got some things going for it and some going against it. On the plus side, for an access point lake site, it feels very secluded. On the negative side, flat ground is at a bit of a premium. If you’ve got a smaller group and you’re looking for an easy paddle that will still provide some peace and quiet, this is a decent option. If you’ve got a larger group and multiple tents, make sure at least a couple of your buddies like multi-level sleeping arrangements.

Terrain: This is a rocky site. It’s not hilly, but there isn’t a ton of flat ground, either. Lots of slight rises and falls. The site is dotted with tall pines, so the ground cover is a mix of dried needles and the occasional root snake poking up from the dirt.

Looking through the Echo Bay Site 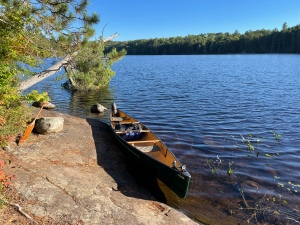 Canoe Landing: There’s a broad, east facing rock slope looking out at Echo Bay. You can pull your boat up on the shore here. There aren’t many underwater obstacles, the shelf flows smoothly into the lake, but those rocks are slimy. It’s like trying to climb up the slime trough in a 90s kids’ obstacle course show.  This means hopping out of the canoe to load and unload may leave you looking like you’re auditioning for a part in Bambi’s Icecapades. Fortunately, it’s easy enough to jam the bow of your boat up on shore and climb out there.

Fire Pit: The pit is in the middle of the site with a semi-obstructed view out to both Echo Bay and the narrows that connects the Bay to Rock Lake. It’s a fine pit. Nothing too exciting. But it gets the job done. There was, at least there was when we were there, a lot of standing dead trees in the woods, and a lot of dead trees that were no longer standing, also in the woods. Basically, it’s a horror movie waiting to happen if you’re a tree. Firewood was not an issue. 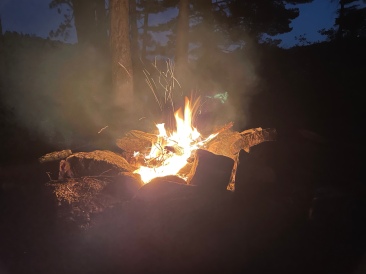 Swimability: Getting in and out of the water was kind of a challenge. The rocks really were quite slippery. So, actually, scratch that. Getting in wasn’t a problem. In fact, getting in was probably easier than you’d want it to be. Getting out, that was the challenge. That said, once you’re in, it’s a decent spot to swim. The ground drops off quickly enough and the water isn’t too murky. 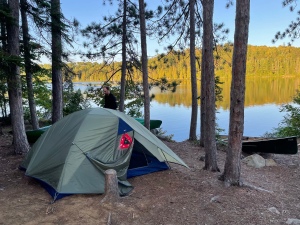 Tent Sites: As I hinted above, this is a bit more of a challenge. The best tent spot is directly beneath a widow maker factory of a tree. There’s some decent flat ground there, but also a decent chance you’ll be flattened to the ground by a falling branch. Other than that, the spots were somewhere between B and C grades. They were workable, but not ideal (we had two ground tents and one hammock tent).

Thunderbox: Back in the woods a bit from the site. It’s in pretty good shape. Private, didn’t break underneath me … can’t ask for much more. 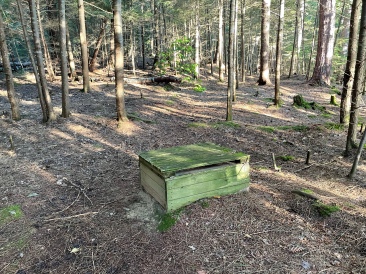 Accessories: There were a couple of decent counters near the fire pit.  That was about it. As far as I can remember, there weren’t even any log benches around the pit, so this is a pretty basic spot.

Views: Obstructed views east across Echo Bay from most of the site. If you go down to the water it’s actually a very pretty sunrise view. The site is also at the corner of the start of Echo Bay and the narrows that connects to Rock Lake, so you can see towards Rock along those narrows from a nice viewing ledge on the narrows side of the site. In other words, you’ve got both a decent sunrise and sunset view, depending on where you’re standing. 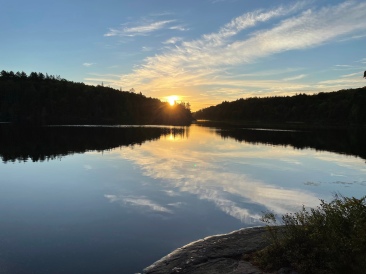 View from the sunset rocks.

Notes: This site is a solid B. It’s not spectacular, and it’s not terrible. It’s basically my grade 11 biology final exam.