This is the closest canoe-in site to the natural waterslide area at High Falls. That alone makes it a worthwhile place to set up shop, but it’s got a few points in its favour in its own right as well. There’s plenty of space for a large group to spread out, the firepit area is in good shape, there are some handy accessories (including a bear hang) and there’s only the occasional whiff of something that smelled like a cross between a rotting carcass and week old trip socks wafting through the air.

Terrain: This is a relatively flat site with very gradual changes in the slope. Those changes are there, however, and if you happen to be here during a rain storm try and make sure that you aren’t setting your tarp up over a low point, because you might end up sitting in the middle of a very shallow lake. Ground cover is pine needles and, well, sometimes water I guess. 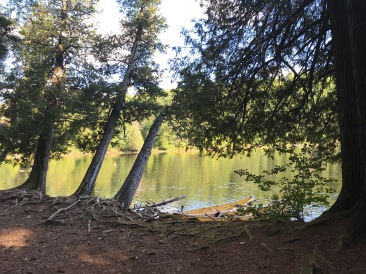 A view of the canoe landing. Sort of.

Looking across the site. Stratton Lake is to the left.

Canoe Landing:  Not bad. Not great. It’s a rocky shoreline with a decent step up from the rocks to the site proper. Coming in sideways is tough because the beach area gets pretty shallow, but if you’re approaching bow on there isn’t a ton of space to pull your canoe up before you run up against that small ledge. It’s not a huge issue, but also not the easiest spot to load/unload (of course, this problem vanishes entirely by just getting your boots wet).

Fire Pit: The fire pit is decent. It’s well built and big enough to get a nice sized blaze going. We cooked our dinner over the fire both nights using the site’s grill and didn’t have any trouble balancing a pretty heavy pot of chili on the fire pit walls. Basically, if your fire pit can support five guys’ worth of chili then it passes my “is it built okay?” test. There are a few benches in a U shape around it facing out to the lake that make for a good place to watch the fire and the water at the same time.

Tent Sites: Tons. We picked this site because we needed lots of space to set up tents, and this definitely offers that. Lots of decent, open, flat spaces to put tents ranging in size from solo shelters to 4-5 man tents. There’s a wide, flat strip across the front of the site for people who want a water view and select spots further into the trees if you want a slightly obstructed water view. The only thing you’ll want to think about is how likely it is that a nearby tree is going to fall over on your particular flat space during the night (we heard two trees come down for seemingly no reason at all while we were on this site). Other than that, it’s a great spot for large groups.

Lots of tent space on this site.

You could fit a couple more tents beside this one.

Swimability: Kind of meh for swimming. There’s a rocky beach you can walk in on, and I did, but the underwater terrain feels kind of gunky and I couldn’t shake the feeling that I was about to step in something awful. However, this is the closest site you can get to the High Falls swimming hole, which is the most swimmable place in the Park, so I have no idea why you’d want to swim here instead of there anyway.

Thunderbox: The Thunderbox was in so-so shape when we visited. It was also almost full. Which is gross. I’m guessing this site is pretty heavily frequented, which means the T-box is also pretty heavily frequented. I mean, it’s not going to kill you to use it, but it’s not going to make you feel fantastic either. It is far enough away from the rest of the site that no one will hear you crying as you think about how close your own butt is to the mound of pooh directly beneath you.

Accessories: A really good table near the fire pit and a bear hang wire that is not near the fire pit (fortunately). To be honest, I prefer my bear hangs further away than this one is, but it definitely gets the job done. Hmm. Reading that sentence it sounds like it’s a wire for hanging bears. It is not that. It’s a wire to hang your food from so that bears can’t get it. Glad we cleared that up. 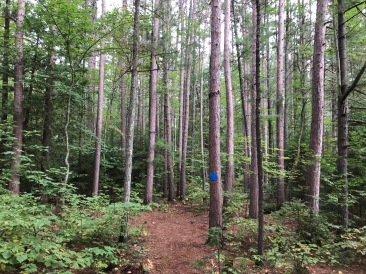 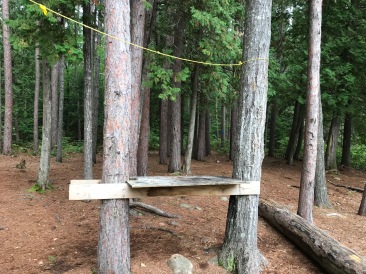 Views: This is the site’s big downfall. While there’s an okay view south down the bay that leads to the St. Andrew’s portage and the rest of Stratton, mostly you’re looking at the wall of trees that is the far shore. On top of that, there’s a decent amount of shoreline tree coverage on the site as well, so it’s a partially obstructed view in a few places. You’re east facing, so there’s no sunset view at all. The sunrises might be okay; when we were there the mornings were socked in with mist so it was impossible to tell. 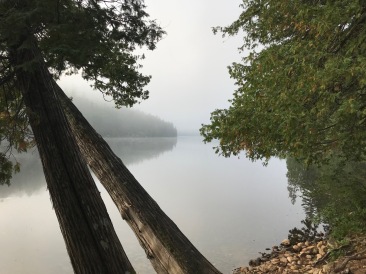 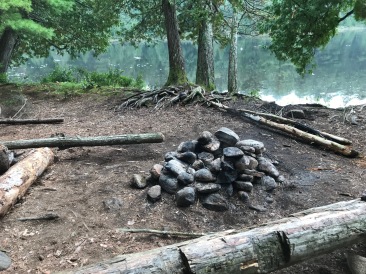 Notes: This site is fine, but it’s definitely the third on the list of three that I’ve stayed on on Stratton. I like it’s proximity to High Falls and its room for multiple tents, but apart from that it’s pretty average.