I’ve been getting a lot of questions recently about the Park from people who are either new to camping or looking to get back into it after a long layoff. That’s awesome! I’d question picking me as your go to guy, I once forgot to pack a map and flashlight for a trip, but I’m all aboard with more people discovering the Park. (In seriousness, I’ll say right off the bat that you don’t want to be using me as your sole source of information on the Park. I’m not an expert and there are a ton of great resources out there you should take a look at as well). That being said, I’ve put together a list of the most common questions I’m getting. If you don’t see your question answered, or you want to know my thoughts on the most recent season of Star Trek Picard, you can always reach out to me directly through the contact page. I also strongly recommend you check out the Park’s actual FAQ.

How do I book Site X on Lake X?

I get this one a lot and the confusion here is my fault. I’ve numbered the sites in my campsite reports just so I can keep them straight in the archive (an idea that I 100% stole from the Algonquin Adventures Portage and Campsite Inventory, go check it out, there’s a ton of great info there). It’s a lot easier to call a site “Site 1” instead of “You Know, The Site on Big Trout on the Island, No, not that Island. The other Island”.  The Park doesn’t book back country reservations by site, it books them by lake. Sites on each lake are available on a first come first serve basis. When you pick a lake all you’re guaranteeing yourself is that you’ll get a site on that lake. The site you get depends on how many other people are heading to that lake that day, and who got up first.

I want to go to a big lake with lots of privacy, not too long of a drive from Toronto/Ottawa, no portages and I’m going next weekend. Where do you suggest?

No one wants to go camping just to get stuck listening to their neighbour play the guitar badly until midnight. Privacy and seclusion are one of the big draws about going into the Park. But to get that privacy you’re probably going to have to work for it. Lakes near access points, particularly lakes near access points that are close to Toronto or Ottawa, are usually pretty busy.

Here are a few general rules of thumb to remember where it comes to seclusion and the Park:

How are the bugs?

I mean, that’s not always the case, but why not plan as if it will be? Bring bug spray and a bug jacket. If you’ve got small humans with you slather the bug juice on and be prepared for them to be covered in bites anyway. I’ve added a Thermacell to my gear for bug season trips and I’ve found it to be pretty awesome. Bug tents are also helpful. As are flamethrowers. (Don’t bring a flame thrower).

Time of year matters a lot here as well. If you’re going in at any point between Late May and early July, be ready to get bitten. July can still be pretty bad, depending on the weather. By early August I usually find that they’ve died down enough to be barely noticeable, and by late August or September the Park can feel like a bug free utopia.

Can you recommend some routes?

This is a tough one. I’ve got lots of routes I’ve really liked, but what works for me isn’t necessarily going to work for everyone. Feel free to contact me directly with the details of your trip and I can give you some options or thoughts. That being said, here are a few routes/ideas that aren’t bad for beginners.

If I see a waterfall, and I can do it safely, should I sit under it?

(Now let’s answer that question much more accurately. First of all, low maintenance portages are not always pure misery. In fact, I’d say they aren’t usually. There’s just a better chance it will be than there is with a regular maintenance portage.

Where do I poop?

That, my friend, is a Thunderbox. There’s one on every back country site. You’ll usually find it a short walk behind the site. Sometimes, (ahem, Longbow Lake Site 2 I’m looking at you) it’s too short of a walk, but that’s beside the point. This is where you poop. Please, please, please do not poop anywhere else. I mean, if you’re on a portage in the middle of the woods and you don’t have a choice then, yeah, go dig a hole (very, very far from the portage), but if you’re on a site, or near a site, use this. Let’s keep the back country not gross.

One thing, the thunder box is not a garbage can. Please don’t put your garbage into it. If you can’t burn it (and no, those shingles you carted in with you can’t be burned), carry it out.

If I’m driving on highway 60 and I see a moose, should I get out of my car, wander all over the road, get as close to the moose as I can and start taking selfies with it?

No. No you should not. Remember, moose are large animals. Getting close to a large animal is generally a bad plan, unless that large animal is filled with stuffing and you just won it at the ring toss. If you really feel you have to pull over to get that picture make sure your vehicle is well off the road, keep kids close (or preferably keep them in the car) and leave enough distance between you and the moose that if something toggles the switch in its brain from “time to eat some slimy green stuff” to “time to charge some upright land apes” you’ve got time to get out of its way.

Should I leave my garbage in the Thunder Box?

Should I leave it in the fire pit?

Well, then should I just kind of drop it everywhere? Or hide it in a tree?

What about if I feed it to the animals? Animals like to eat garbage right?

No. They do not. Do not do this either.

Then what should I do with my garbage?

Pack it out. If you can’t burn it, carry it. Let’s keep things clean. If I arrive at the site after you I don’t want to know what you ate/drank. I don’t even want to know you’ve been there.

What lakes have cell service?

I’ve gotten reception on White Trout, Clover, Burnt Island and Sunbeam among others, but for the life of me I can’t get a signal at the north end of Canoe Lake. This is to say that cell service in the Park is pretty hit or miss. There are towers along highway 60 so, theoretically, the closer you are to the highway the better your chances of getting a signal. But that’s not always a guarantee. Algonquin is pretty hilly and, based on my understanding of how cell signals work (magic, basically) hills = bad. In other words, don’t count on getting reception while you’re in the back country. If you do, it will most likely be in random pockets, not on entire lakes. If you’re thinking about this for safety reasons, I recommend checking out a satellite communicator. I have an In Reach and it’s been great. Most of the Outfitters around the Park will be happy to rent you one if you don’t want to make the investment right away (and it is a bit of an investment. Don’t buy one unless you’re planning on making this a regular thing).

Should I bring in my own firewood?

I see this question a lot from people who are new to back country camping but who have done a lot of car camping. I haven’t done much car camping, but my guess is that bringing in your own wood is common there. If that’s the case, it’s the opposite in the back country. The Park specifically asks that you don’t bring in outside wood to avoid transplanting invasive species (which probably means some kind of beetle. Beetles are the worst. The Beatles were the best). The nice thing about going camping in the woods is that the woods are made of, well, wood. You can usually find plenty of wood for burning just by going for a walk behind your site. If it’s late in the season and the area around your site is pretty picked over, just paddle across to a stretch of shore that doesn’t have many sites near it and you’ll probably find more than enough.

While we’re talking about fires, here are a few things to remember:

A) Don’t cut down live trees. Live wood doesn’t burn well and also it’s a jerk move.
B) Speaking of jerk moves, don’t strip birch bark off of live trees. I’ve been to way too many sites where pretty much every birch tree within 25 feet of the fire pit has a six foot high black band around its trunk where people have pulled off the bark.
C) Marshmallows are delicious. Eat many of them.
D) Keep fires in the site’s fire pit. You don’t want to be the person responsible for burning down half of Algonquin, and you’d be amazed at how far a root fire can spread without you realizing.

Should I bring a spare paddle?

Let me answer your question with a question. Do you want to spend multiple days paddling with this? 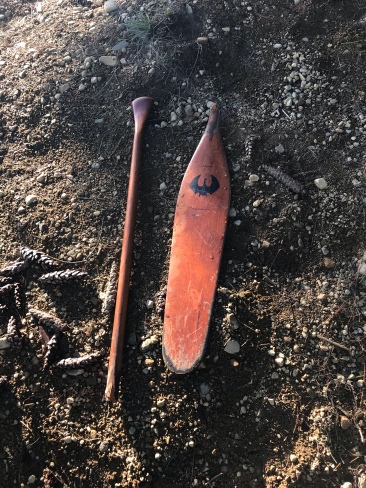 No? Then yes, you should bring a spare paddle.

That’s it for now. I’m always looking to add more questions and answers, so if you can think of some feel free to reach out by email or @ me on Twitter, Instagram or Facebook.